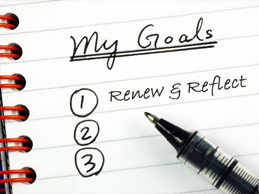 Over the holidays I was with some friends and of course the “what is your new year’s resolution?” question raised its ugly head. Even those people who sit upright and spout their resolutions look like they are reciting a fifth grade speaking assignment. You can sense that most people have no real conviction that their resolutions will make it past early January.

Changing things about ourselves is hard. It’s dragged down by the weight of actually changing our habits. It is so hard because we view ourselves as a continuum- a never-ending work in progress that doesn’t want to be interrupted by something quite so artificial and ‘outside’ our normal process of selfevaluation. New Year’s Resolutions are such a failure that a completely different strategy must be employed, if we really want to make meaningful inroads. Our suggestion comes from what we all know best about ourselves.

Tell your own story at the beginning of each New Year! Start with what happened last year. Pull out your calendar and quickly page through it to jog your memory. I like to start with the small things. Did I have a good year eating? What was my favorite meal of the year? How am I looking? Did I change anything major about my appearance last year? Is it time for a makeover? Was I as good a parent as I hoped? Were you attentive to your parents? Were you good to the pets? The mundane often becomes a breakthrough realization. Then, put it in perspective and look for the improvements that you want to remember and look back on NEXT year.

Maybe you actually DID stick with your weekly exercise. Maybe you are becoming friendlier. “You know, I think I’ve stopped worrying as much.” Only YOU will know the answers to your own observations. But this is the time to try to put last year in some sort of perspective that, during the holidays, we often just give lip service. There are too many parties and family gatherings to really try to put life into perspective.

Now the fun part! It’s time to visualize how you envision a more positive you emerging. Say it out loud. Probe what actions you want to take. But be positive. Because most sustained actions we take require that we feel good about ourselves. It needs to feel GOOD to say it and to see it in your mind.

Often when we speak about ourselves, we place ourselves in our roles as parents, spouses, or children. During your self-interview the focus is always on the real YOU. It becomes a much stronger way to express what sits at the heart of your desire to change- uncovering your own motivations as you look back on last year and you look ahead to this one.

Once a month it’s handy to review a shorter timeframe, to stay focused on a joyous way. You want to renew and reflect on what is most important to the you that’s paying attention. There will always be time to assume the role of grandparent, parent, spouse, or adult again, once you have satisfied your own need to take stock.

Get in Touch with Us at
Producers@PersonalCastStudios.com
or call us at 888-320-5355